Everyone and their grandma know that soccer is the most popular sport in the world. Billions of people watch it, and millions play it. However, in order to play at the highest level, soccer players need to have an insane amount of skill and to dedicate themselves to training day in, day out.

Not to worry, though, they get paid a lot to do just that!

In this article, you will learn who is the highest paid soccer player and who makes the most out of their sponsorships. We’ll also throw in some interesting facts about these players.

So, without further ado, let’s get the ball rolling. 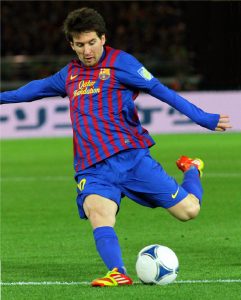 It doesn’t come as a surprise that Messi is on top of the highest-paid soccer players list, as he is regarded by many as one of the best soccer players of all time.

What’s more, the Argentine is also the highest-paid athlete in the world, right above other athletes like Roger Federer, Canelo Alvarez, and Cristiano Ronaldo, who just so happens to be the next on our list. Messi’s salary is reported to be €565,000 or approximately $628,000 per week.

Did you know that Messi was diagnosed with a growth hormone deficiency as a kid and that Barcelona paid for his treatment after he signed his contract?

As far as we’re concerned, at 1.7 meters tall, Messi is the perfect height to do what he does best and deserves a paycheck worthy of one of the best soccer players around. 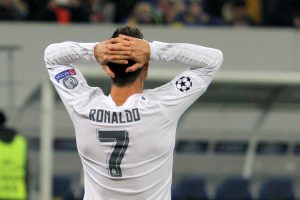 While Ronaldo’s current salary isn’t even close to Messi, CR7 was the highest-paid soccer player in 2018 and 2017. Away from the pitch, Ronaldo has been doing a fantastic job and earning a ton of money from promotions and his line of denim, footwear, fragrance, and hotels and gyms.

The UEFA Champions League top-scorer is the only person to ever win the top three football leagues — Serie A, the Premier League, and La Liga. Naturally, being able to say that comes with some benefits, as CR7 rakes in €576,923 every week, which is around $640,000.

While Ronaldo isn’t number one on our list, he is still the richest soccer player in the world, with a staggering net worth of $450 million.

Did you know that Juventus have sold 520,000 CR7 jerseys worth a whopping $60 million since they’ve signed Ronaldo? Almost enough to pay Cristiano for a full year.

However, if then Manchester United manager Alex Ferguson hadn’t insisted that Ronaldo take the number 7 jersey and fill in the shoes of his illustrious predecessors like Eric Cantona and David Beckham, one of the most expensive soccer players of all time would be known as CR28 today.

Not quite as catchy, is it? 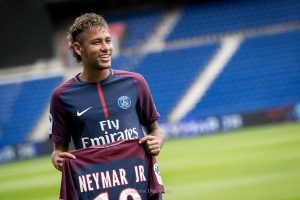 One of the highest-paid professional soccer players, Neymar has ovations-worthy dribbling skills which make him an outstanding performer on the pitch. Apart from that, he is known for two things – controversy and his historic transfer.

PSG paid Barcelona $263 million in order to sign the Brazilian in 2017.

Between 2011 and 2013, Neymar was found guilty of avoiding taxes and had to pay a fine of $1.2 million. That might sound like a lot, but it’s spare change for the Brazillian, considering he is the highest-paid soccer player per week, earning a mind-boggling €707,692 — approximately $780,000 by today’s rates.

Neymar managed to score his 100th goal on his 20th birthday. Quite an impressive feat for such a young player.

It’s not all sunshine and rainbows for Neymar. After his altercation with a fan in PSG’s recent loss in the French Cup, it was announced that Neymar lost national team captaincy. 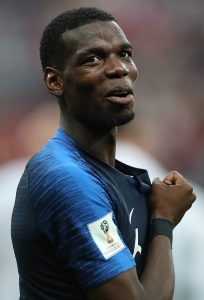 While Pogba is not even close to being the highest-paid soccer player, nobody can dispute his talent. What’s more, considering his performance, the World Cup winner will surely get a much juicier contract from the Red Devils once his current contract expires in 2021. Currently, it is reported that Pogba makes around £290,000, which translates to approximately $372,000 every week.

Many people suspect that his inability to work with Mourinho is the reason Manchester United fired their previous manager, Jose Mourinho. If the rumors are true, it just goes to show how much the team values their star player.

After all, Pogba was the highest-paid soccer player in the world at the time of his transfer from Juventus to United in 2016.

While he played for Juventus, Pogba’s nickname was Il Polpo Paul, which translates to Paul the Octopus.

Did you know that one of the players with the highest soccer salary has two twin brothers? Matthias used to play for Sparta Rotterdam, while Florentin plays for Genclerbirligi. Just imagine the confusion on the pitch if all three of them were on the same team! 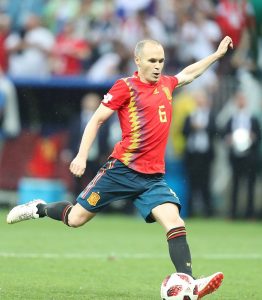 Iniesta is best known for his impeccable passing skills and a full overview of the pitch. Combine the two, and you’ll see why he is one of the highest-paid soccer players. What’s more, he is considered by many as one of the best midfielders of all time.

After he moved from Barcelona to Vissel Kobe, one of the top paid soccer players ended his 19-year long partnership with Nike and signed a deal with Japanese footwear company Asics. Quite fitting, if you excuse the pun. However, with a salary of $576,923.08 a week, one can safely say that Iniesta is doing quite alright.

Any sommeliers around? Here’s something interesting:

Iniesta has a winery called Bodega Iniesta. One of the wines that they produce is called Minuto 116, which is an homage to Iniesta scoring in 116th minute back in 2010 and bringing Spain their first World Cup title. 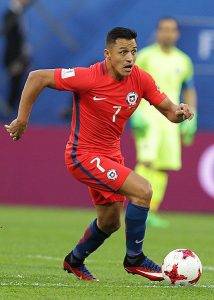 While the Chilean had a tough time riddled with injuries after his transfer from Arsenal to Manchester United, he is still one of the best players in the world. And that’s why the Red Devils are willing to pay Sánchez approximately $450,000 every single week, making him one of the highest-paid footballers.
Well, that is before they loaned him Inter Milan.

Sánchez grew up dirt poor, but that didn’t stop him from becoming one of the highest-paid soccer players ever. While growing up, he couldn’t even afford a pair of soccer boots. Now he has a multi-million-dollar deal with Nike — excellent work, Sánchez!

Since the beginning of his professional soccer career in 2005, Sánchez has made 442 club appearances and scored 144 goals, a number that will surely grow.

Did you know that Alexis Sánchez is an avid dog lover? He has a little over 10 million followers and is frequently posting pictures of his everyday life and his dogs. The guy clearly likes taking pics!

But that’s not all:

Sánchez has even taken to acting! He plays a leading role in Mi Amigo Alexis, a movie about a young boy from Chile who wishes to become one of the best soccer players and reminds Alexis of the reason he fell in love with soccer. 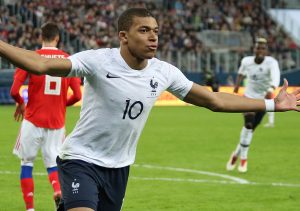 Kylian Mbappé is a superstar in the making. While there are dozens of excellent young players, it only takes one glance at Mbappé on the ball to realize this young Frenchman is a prodigy.

In 2018, Mbappé became the second-youngest player to ever score in a World Cup final, right after the man still considered the greatest ever soccer player, Pelé. After an excellent performance which helped France win the 2018 World Cup in Russia, the kind-hearted Mbappé donated his $500,000 bonus to charity. Quite admirable!

However, that wasn’t all that big of an expense for the prodigy, especially when you consider the fact that he is one of the highest-paid professional soccer players and earns approximately $588,000 per week.

Do you want to know where he spends a small chunk of his fortune? Stick with us!

One of the things that Mbappé likes the most is sneakers. Even though he is one of the best soccer players and wears expensive footwear all the time, he describes himself as a kid with a new toy whenever he gets a new pair of sneakers.
Furthermore, Nike even opened up a special section on their website in appreciation of Mbappé’s love of footwear. So now you can get all the pairs handpicked by the young Frenchman. 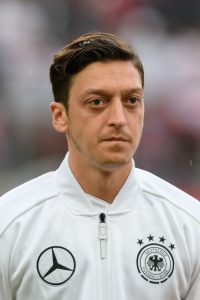 Since he extended his contract with Arsenal in 2018, Mesut Özil has quickly climbed the ladder and become one of the highest-paid soccer players in the world. However, much like his former teammate, Alexis Sánchez, Özil has had a difficult time with injuries that have affected his form.

Things aren’t looking all that well for him even back home. The German superstar left the national team after media, fans, and even the German federation president criticized him for taking photos with Turkish president Erdogan and having him as a wedding guest.
But while everyone is criticizing Özil, he is busy making £350,000 per week, which translates to about $454,000. Not half-bad for a week’s work.

Like many of the highest-earning soccer players, Özil has been donating to various charities together with his wife.

While you might already know Özil is an avid Fortnite player from his activities on his Twitch channel, it may come as a surprise that he founded a professional eSports team that competes in FIFA tournaments. He even has a Fortnite team.

How about the Highest-Paid Female Soccer Players?

More and more women are opting to become professional soccer players, which is something that we as fans absolutely love!

When it comes to the highest-paid female footballers, the number one spot is currently occupied by Alex Morgan. The US forward has an annual salary of $450,000, which translates to $8,653 per week.

While Lionel Messi is the current highest-paid footballer in the world, time flies. So, before you know it, he can be overtaken by someone else. There are many young prospects to keep a close eye on, PSG forward Kylian Mbappé undoubtedly being on top of the list.

While Mbappé currently gets paid only $30.6 annually, no soccer fan would be surprised if he becomes the highest-paid soccer player in the world in a few years.

51 Most Expensive Football Transfers Ever Made in the World [INFOGRAPHIC]