Sports have been around for nearly as long as humanity itself, and in that time some truly weird and wondrous things have happened in the field of competition.

So, read on to learn some awesome sports facts and trivia to bring up in your next cookout.

Contents show
Incredible Sports Facts:
1. Micheal Phelps has won more Olympic gold medals than 161 entire nations
2. In 1999, Stefan Schwarz had a special “space clause” in his contract that would render it invalid if he ever went to space
3. It’s an urban sports legend that India withdrew from the 1950 World Cup because FIFA wouldn’t let them play barefoot
4. Astronaut Alan Shepard took three swings to two balls on the surface of the moon in 1971
5. MLB Hall of Fame pitcher Gaylord Perry hit his first, and only, home run hours after Neil Armstrong set foot on the moon
6. The BBC broadcast the first live televised football match in October 1946
7. The World Sauna Championships were an annual contest for endurance held in Finland, from 1999 to 2010
8. The Tour de France has “unwritten rules” to promote good sportsmanship
9. There’s a 150-year-old oak tree at the center of a soccer field in Estonia
10. Sheep Counting is an official sport in Australia
11. In 1970, El Salvador and Honduras went to war for only 100 hours. The war coincided with a FIFA World Cup Qualifier 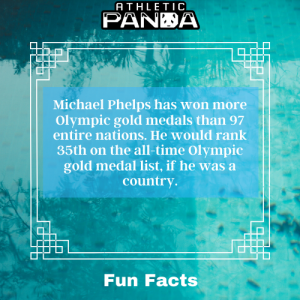 Phelps retired from competitive swimming for the second time, following the Rio Olympics in 2016 where he won five gold medals and one silver medal. At 31 years old, his performance was considered a unique achievement for an athlete well beyond the typical peak for male swimmers.

2. In 1999, Stefan Schwarz had a special “space clause” in his contract that would render it invalid if he ever went to space 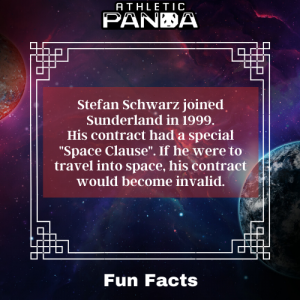 Back in 2002, the idea of commercial space flights started floating around and lots of affluent people were excited by the possibility of going to space.

Schwarz’s agent had a seat on one of the first planned commercial flights making Sunderland concerned he would want the player to join him.

So in a bit of a light-hearted moment during protracted negotiations, which made for one of the truly funny sports facts out there, Sunderland added the clause in Schwarz’s contract as a way to protect the club, and the player, from any “dangerous activities” that wouldn’t normally be covered by insurance.

3. It’s an urban sports legend that India withdrew from the 1950 World Cup because FIFA wouldn’t let them play barefoot 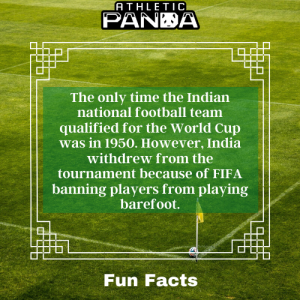 Sailen Manna, who would’ve captained India during the World Cup, confirmed the real reason in an interview with Sports Illustrated. The AIFF just did not take the World Cup seriously and they considered the Olympics to be the ultimate goal.

As crazy as it sounds, in 1950 the World Cup wasn’t the huge draw that it is now, particularly for Asian countries. Facts about sports show that Indian football officials just did not think that the World Cup was a big enough of a deal to warrant sending their players halfway across the world.

4. Astronaut Alan Shepard took three swings to two balls on the surface of the moon in 1971 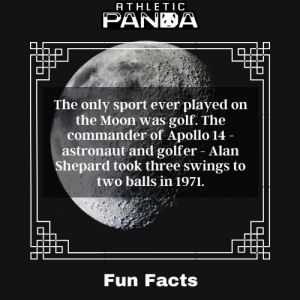 Among the really cool sports facts is that Alan Shepard wasn’t just the commander of the Apollo 14 space mission in 1971, but also an avid golfer. He hatched a plan to try and play golf while on the moon but unfortunately, NASA did not have a sense of humor after the ill-fated Apollo 13 mission where an oxygen tank exploded causing the astronauts to scramble to return safely to Earth.

He, however, somehow managed to sneak in a club and two golf balls by modifying a standard 6-iron head of a Wilson golf club and attaching a rod that astronauts use to scoop soil and rock samples. He tucked the clubhead into his spacesuit and hid the two balls in a sock.

As Shepard and Astronaut Edgar D. Mitchell were exploring the lunar surface, he took his chance, attached the clubhead to the rod, and hit his two balls. Talk about sports fun facts that are out of this world!

5. MLB Hall of Fame pitcher Gaylord Perry hit his first, and only, home run hours after Neil Armstrong set foot on the moon 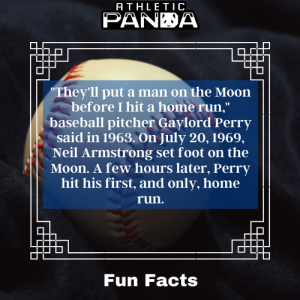 One of the most amazing sports facts in history is the tale of San Francisco Giants MLB pitcher Gaylord Perry’s first and only home run. As the story goes, Gaylord was in batting practice when a reporter named Harry Jupiter called out to manager Alvin Dark that the young pitcher looked like he had some chops.

To which Dark replied, “No way. There’ll be a man on the moon before Gaylord Perry hits a home run.”

Then it happened, Gaylord Perry hit his first MLB home run. On the same day, Neil Armstrong and Buzz Aldrin landed on the moon with the Apollo 11 space mission. 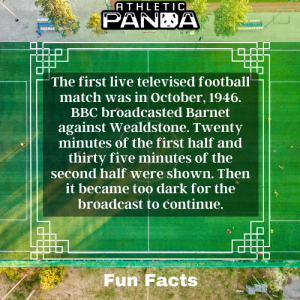 It seems ridiculous when you think about it from today’s perspective, but one of the more interesting facts about sports is that for a long time almost everyone in football hated the idea of being on television.

The general feeling among the Football League and the clubs themselves was that if a football match was screened on television – even as highlights hours after it was played – nobody would bother going to see it at the stadium, or any other match that was being played at the same time.

The first organization to agree to a TV screening was the Athenian Football League, who gave the BBC permission to televise the match between Barnet and Wealdstone on October 19, 1946.

7. The World Sauna Championships were an annual contest for endurance held in Finland, from 1999 to 2010 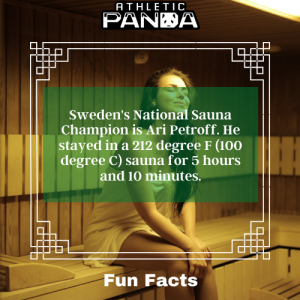 One of the strangest sports facts is that a World Sauna Championships exists. The event started in Finland but an off-shoot of the Finnish version popped up in Sweden, where Ari Petroff stayed in a sauna for five hours and 10 minutes to become a national champion.

Sauna bathing in extreme conditions is a severe health risk so all competitors took part in the contest at their own risk, and had to sign a form agreeing not to take legal action against the organizers. 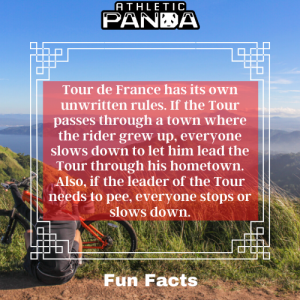 The unofficial rules of the Tour de France make for a lot of interesting sports facts. They are an important part of the culture and functioning of the sport. Mostly because the rules are practiced and enforced by the riders themselves, thus allowing the riders to govern themselves and create a sense of ethos among them.

Despite its long history of cheating, professional cycling also has a strong ethos of honorable racing within the profession. Which is ironic, seeing as the unwritten rules of the Tour may matter more to the riders than the official regulations.

Ultimately, the unofficial rules provide a kind of natural justice or order that can be preserved from within and such rules and race etiquette can build social cohesion in the race itself.

9. There’s a 150-year-old oak tree at the center of a soccer field in Estonia 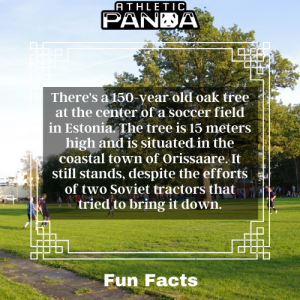 The Orissaare tree stands in the middle of a football stadium, which was enlarged in 1951 and therefore surrounds the tree.

The locals who play football on the pitch have become used to it and know how to use the tree to complete passes. It also offers shade to the players.

Another random sports facts example — It was named European Tree of the Year in a contest in 2015.

10. Sheep Counting is an official sport in Australia 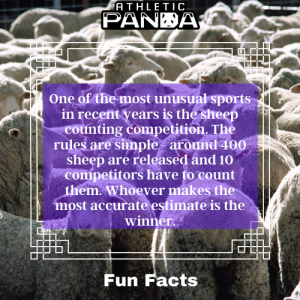 It’s one of the particularly weird sports facts but yes, Sheep Counting is a sport. Australians love to watch and play sports, and in 2002 they added a new addition to the yearly calendar — a sheep counting competition.

The rules of this contest are quite simple — about 400 sheep make a mad dash past ten competitors, who will try to count them as accurately as possible.

11. In 1970, El Salvador and Honduras went to war for only 100 hours. The war coincided with a FIFA World Cup Qualifier 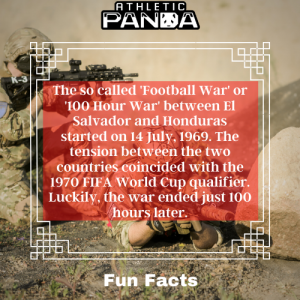 One of the more curious sports facts is that in June 1969, Honduras and El Salvador met in a two-leg 1970 FIFA World Cup qualifier. Tensions between the two countries were already high over land reform in Honduras, along with immigration and demographic problems in El Salvador.

Honduras won the first game 1–0 in its capital of Tegucigalpa on June 8, 1969. A few days later, on June 15, El Salvador won the second game 3–0, which was played in San Salvador and was followed by violence between fans.

By the day of the play-off match in Mexico City, El Salvador had dissolved all diplomatic ties with Honduras, stating that in the ten days since the game in El Salvador, 11,700 Salvadorans had been forced to flee Honduras.

Finding out interesting sports facts and trivia is part of what makes being a sports fan so much fun.

Crazy sports facts especially can make for an interesting conversation starter once we can finally go back out into the world.

Q: What is the first sport ever?
A: Wrestling is considered the oldest sport in the world, there are cave paintings in Lascaux, France, dating back 15,300 years that depict wrestlers.

Q: How many sports are there?
A: By any reckoning, there are more than 8,000 sports in the world.

Q: Who invented sports?
A: While we know plenty of interesting and curious sports facts, no one can say for certain when sports began or who invented it.

21 Richest Boxers in the World [Are You Ready to Rumble?]