A Brief History of Olympics from 776 BC to Modern Times

The Olympic Games are one of the biggest spectacles of modern times. They are an international sports festival that began in Ancient Greece, in 776 BC, according to the most reliable sources. They were abolished in the early Christian times but were revived again in 1896 when the modern history of Olympics begins.

Now, the Olympic Games that took place in ancient Greece have a lot in common with the modern Olympics, but they have some crucial differences as well.

Today, the Olympics are a popular event that brings together thousands of athletes from hundreds of countries around the world to compete in dozens of different sports.

Below, you can learn everything about the Olympic Games history from their ancient beginnings to modern times.

Originally, the games were part of a big religious festival organized to honor Zeus, the ruler of the gods in Greek mythology.

According to legends related to the ancient Greek Olympics, the founders of the games were Zeus and his son Hercules. When Hercules finished his Twelve Labors, he constructed the fabled Olympic Stadium in honor of his father. 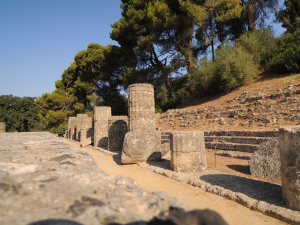 The games earned their name because they were held at the sanctuary of Zeus at Olympia, in the western Peloponnese. The games took place every four years, at the same location.

An interesting fact from the ancient Olympics history is that only men were allowed to participate, and the games were both a sporting and a religious event. Apart from sporting events, sacrifices and tributes to Zeus also took place.

The first ancient Games most likely took place in 776 BC. We know this because the winners of a foot race are documented with inscriptions at Olympia, beginning in 776.

Male athletes, representatives of different city-states from various parts of the ancient Greek world, flocked at Olympia to compete in equestrian, athletic, and combat sports. The ancient Olympics events consisted of running, wrestling, boxing, chariot racing, horse racing, pentathlon, and the mixed martial art pankration. The marathon race was introduced to the Olympics for the first time in 1896.

Much like today, the athletes who participated in these games were considered celebrities. They were respected in their city-states, trained vigorously to achieve the best possible result, and enjoyed a special social status.

The Demise of the Ancient Games

The history of Olympics in the ancient Greek world had been written for almost 12 centuries, until the beginning of the Christian era, after the Roman Empire conquered the Hellenistic world.

While Greece itself was completely conquered in the mid-2nd century BC, the games continued to take place for several more centuries. However, their standards and quality gradually declined due to a lack of support from the new rulers.

By the second half of the 4th century AD, the increasingly Christianized Roman Empire wanted to destroy all remnants of paganism. To this end, in 393, Emperor Theodosius I banned all pagan festivities, including the Greek Olympic games. 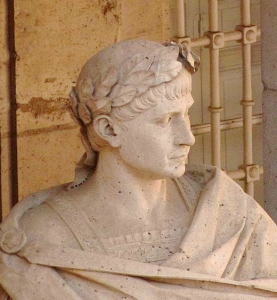 However, according to other facts, another final date could have been 426, when Emperor Theodosius II decreed the destruction of all Greek temples.

Between the 17th and 19th centuries, the desire for the revival of the games, inspired by the long history of Olympics, grew stronger. Numerous athletic events during that era had the “Olympic” name. However, none of them came close to encompassing everything the original games stood for.

For example, the Cotswold Olimpick Games were organized by Robert Dover in Chipping Campden, England, starting from 1612. These games had an annual character but were held on and off due to the turbulence of those times.

After that, L’Olympiade de la République was organized in France for two years between 1796 and 1798. It consisted of various modern and Ancient Greek sports.

The Grand Olympic Festival also joined the list of Olympic games between 1862 and 1867. This festival was founded by John Hulley, along with EG Ravenstein and Dr. Brookes. Together, they established the National Olympian Association, whose articles would later be used as a guide for the International Olympic Charter.

Eventually, the first Olympic Games of modern times were held in 1896 in Athens, Greece. The person most responsible for the rebirth of the Olympics was Baron Pierre de Coubertin, who proposed the idea to the public in 1894.

His original plan was to organize the Olympics in Paris in 1900. However, the delegates from 34 countries in the world loved the idea so much, they pressed him to organize the games four years earlier and move them to Athens, the capital of the Kingdom of Greece.

The rebirth of the Olympics happened at the Panathenaic Stadium in Athens. It brought together 241 athletes from 14 nations who competed in 43 different events. These included both athletic disciplines that were a legacy from the Аncient Greek times and modern sporting events. 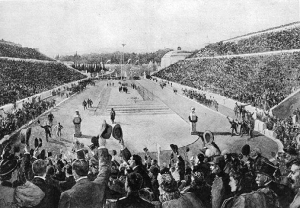 The public loved the idea of the games, which received a lot of attention and praise around the world. Many spectators, athletes, and officials thought they should always take place in Athens in order to preserve the tradition.

But the IOC thought otherwise.

So, the 1900 Summer Olympic Games were held in Paris and marked the first time women were allowed to compete.

The next games, in 1904, were held in St. Louis, as part of the World’s Fair. The majority of the athletes who participated (580 out of 650) were from the United States. Because of that, they were not recognized as a successful international sporting event.

As the modern Olympic Games grew in popularity, the need for Winter Games became obvious. Up until 1924, the Olympics were predominantly a summer event that did not include any winter sports.

The history of Winter Olympics began in 1924 after the first event was held in Chamonix, France. They were planned as a continuation of the Paris Summer Games that took place three months earlier.

At first, the IOC wished to have the same country host both Olympics in the same year, but that proved to be impossible. That’s why they chose to have separate hosts while keeping the Summer and Winter Games in the same year.

It might come as a surprise that this model continued until as recently as 1994, when the Winter Olympic Games in Lillehammer, Norway were held in a different year.

Since then, Summer and Winter Games are held to years apart and have separate hosts. So far, some notable Winter hosts have included Nagano (Japan), Turin (Italy), Sochi (Russia), P’yŏngch’ang (South Korea), and so on.

The person we should thank the most for the existence of Special Olympics is Eunice Kennedy Shriver. She is the sister of the former president of the United States, John F. Kennedy, who started fighting for the rights of people with special needs after her brother took office in 1961.

She was saddened by the realization that children with disabilities did not have places to play and were treated quite badly by society, so she decided to take action.

The first step that marks the beginning of the history of Special Olympics was the summer day camp she started in her own yard in 1962, which was intended for children with intellectual disabilities.

The timeline of the events that led to the formation of Special Olympics includes several important dates.

The idea behind Eunice Kennedy’s summer camps for children with ID was to see whether they could actively participate in sports. By 1967, this project has proved to be a huge success.

So, in the fall of 1967, the Chicago Park District began making plans and organizing a track meet modeled after the modern Olympic Games.

At first, the project was intended only for the residents of the city, but thanks to Eugene, athletes from around the country were included.

In a joint news conference, Eunice Kennedy Shriver and the Chicago Park District announced their plans that would change the history of Olympics as we know it—the first Olympics for young people with different disabilities. 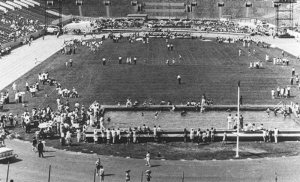 On July 20, 1968, around 1,000 young athletes with special disabilities competed at the first-ever Special Olympics in Chicago.

These athletes competed in more than 200 events, some of which were new Olympic sports, including softball throw, broad jump, 100-yard swim, 50-yard dash, high jump, water polo, and so on.

These Games were considered to be such a huge success that Eunice promised to organize the second Special Olympics in 1970 and continue doing it every two years.

In August of 1968, the Special Olympics were officially added to the Olympics schedule. This was an important date because athletes with disabilities finally received international recognition.

A lot of people are wondering what are the only four sports that have been featured in every modern Olympics. We have the answer to this question. These are:

On the other hand, cycling was a fairly new sport in 1896. The reason why it made the cut that year and every other year since was that bicycles were revolutionary machines. And they still are.

They allowed people to cover great distances without spending too much power and replaced horses, which had a lot of disadvantages. Bicycles were even used during the two world wars and played important roles in the outcome of many battles.

As we have seen, some sports are eternal when it comes to the Olympics. They never get out of fashion. However, new sports are often added to the schedule. The list of sports gradually increased until the beginning of the 2000s, when the IOC capped the number of summer sports to 28.

Some sports to be included in the 2020 Tokyo Olympics that were never featured or had been discontinued for some time include baseball, softball, karate, sport climbing, and surfing.

After the 1924 Paris Summer Games, the Olympics really took off and became more like the ones we know today.

Nowadays, both the Summer Olympic Games and the Winter Games are a true spectacle. They bring together thousands of athletes who compete for gold, silver, and bronze medals in one or more of the massive number of disciplines.

For example, in 2004, the Summer Olympics came back to Athens after more than 108 games and were more spectacular than ever before. More than 11,000 from a record number of 201 countries participated.

The modern Olympics are luxurious events that countries use to boost local tourism and improve their international reputation. Today, the Olympics cost billions of dollars to organize and have the power to make or break a country’s economy. 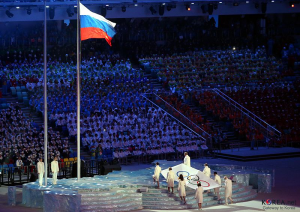 Take as an example the 2008 Summer Olympic Games held in Beijing, China, which allegedly cost a whopping $40 billion to make.

As you can see, the history of Olympics is long, rich, and interesting. The Olympics have been around for almost 2,700 years in one way or another. Even though they were not held during the majority of that time, they were never forgotten.

During their long history, the Games have changed a lot and will probably continue to evolve in the future. That being said, we can rest assured that they can only become bigger and better as time goes by.

Cost of Olympics: 27 Most Expensive Olympic Games Ever [INFOGRAPHIC]