The Tour de France carries the fame of the world’s most prestigious and challenging bicycle competition in history, and with good reason. The modern editions of the race consist of 21 day-long segments (stages) over a grueling 23-day period. The total distance of the Tour de France covers around 3,500 kilometers (2,200 miles).

The Tour de France route may change every year, but the passage through the mountain chains of the Pyrenees and the Alps, and the finish on the Champs-Élysées in Paris remains constant.

Let’s take a look at some Tour de France statistics to get excited about as the 2020 edition draws near.

The history of the Tour de France traces all the way back rivalry between two sports newspapers jocking for readership in France; Le Vélo and L’Auto.

With stagnating sales lower than their rivals, L’Auto had a crisis meeting where 26-year-old Lefèvre, the chief cycling journalist at L’Auto, suggested a six-day race of the sort popular on the track but all around France. L’Auto would cover the race exclusively. Had it succeeded, it would have helped L’Auto match its rival, and perhaps put it out of business.

L’Auto’s circulation doubled throughout the race and Le Vélo, meanwhile, went out of business in 1904.

2. Frenchman Maurice Garin was the inaugural winner of the Tour de France in 1903

Nicknamed Le petit ramoneur (The Little Chimney-sweep), Maurice Garin became a professional by chance. He planned to ride a race at Avesnes-sur-Helpes, upon arrival he realized the race was only for professionals.

Since he wasn’t allowed to compete, he waited for all the riders to leave. Then, he chased after them and passed them all. The organizers refused to pay him the prize money, intended for the “real” winner. Spectators at the race had their own say on the matter – they raised twice the amount and gave it to Garin.

Sixty riders started the 1903 Tour de France and only 21 finished. Garin won in 94h 33m 14s. He also won the 1904 Tour de France, but he was subsequently stripped of the title, which was awarded to Henri Cornet.

3. Miguel Indurain has won the most consecutive Tour de Force races with five

Miguel Indurain rode the Tour de France for the first time in 1985, dropping out in the fourth stage, but would go on to ride for 11 consecutive races. He had to ride five more times before his first victory in 1991, taking the lead at the 13th stage and maintaining it until the end.

In 1994, he set a world hour record of 53.040 kilometers (32.958 mi) on the way to his fourth tour victory. He would cap off his fifth straight tour victory in 1995 by also winning the world time trial championship before announcing his retirement at the beginning of 1997.

4. Only one rider in history, Eddy Merckx, has been King of the Mountains 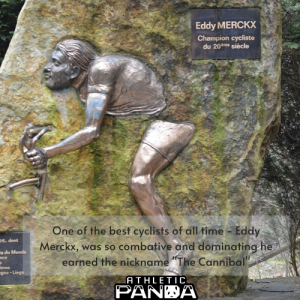 His reign as champion came to an end in 1975, when he finished 2nd to Frenchman Bernard Thevenet. He retired with some of the most impressive Tour de France stats in history. In the course of his career, he was also awarded as the most combative cyclist of the Tour a total of four times, the most of any rider.

5. The 2005 installment was the fastest Tour de France in history

It’s not surprising that the fastest Tour de France came in the Lance Armstrong era. Especially since the seven-time champion publicly admitted to doping for most of his career.

In 2012, the United States Anti-Doping Agency (USADA) released a report implicating, among others, Armstrong. The report contained affidavits, attesting to the widespread use of EPO, testosterone, blood transfusions, and other banned substances in multiple Tours.

Armstrong was subsequently stripped of all his championships from 1998, and all his achievements were annulled.

6. Only four racers have won the Tour de France having held the lead from start to finish

Completing the Tour de France is an extremely difficult test of endurance. Naturally, it’s even more difficult to try and win. Especially leading the race from start to finish is an almost impossible task in the modern era of the Tour. Which is why no one has achieved that feat in 85 years!

The last rider who did it was Belgian Romain Maes. His win in 1935 ended a six-year run of dominance by French riders and made him a hero in Belgium.

Maes had never finished the Tour prior to his victory but managed to bring the yellow jersey back to Belgium. He retired in 1944 and opened a bar near Brussells called “In de Gele Trui” (In The Yellow Jersey).

7. Only 19 at the time, Henri Cornet remains the youngest winner in Tour history

Following the success of the 1903 Tour de France, the passion and competitiveness between riders and fans alike had reached levels of dangerous proportions. Riders cheated profusely, some took trains and lifts in cars while others had themselves towed by trucks.

Fans would beat up riders they didn’t support and they would throw nails on the road, Cornet rode the last 40km of the last day on flat tires. After multiple complaints of cheating the top four finishers of the race were disqualified by the French Cycling Union. This included Maurice Garin, who was allegedly given food by race director Géo Lefèvre when others were denied.

Cornet was declared the winner, although he had taken three hours more than Garin, and became the youngest winner in the Tour’s history just two weeks shy of his 20th birthday.

8. Laurent Fignon, the winner in 1983, was the last rider to win the race in his first appearance

When Bernard Hinault, winner of four of the previous five Tours, announced that he wouldn’t be entering the 1983 Tour de France due to injury, his team was without a leader. Laurent Fignon was added to the team in hopes of, at best, competing in the Young Rider Classification.

After nine stages, Fignon was second behind leader Pascal Simon. After Simon crashed and broke his shoulder blade on the 10th stage, he was forced to give up on the 17th. Fignon took the lead and won the time trial on the 21st stage, winning the race in his first appearance at only 22 years old.

The next year Fignon won the Tour again, this time with a 10-minute margin and was hailed as France’s newest cycling superstar. He missed the ‘85 Tour due to a knee injury, retired on the 12th stage in ‘86, finished 7th in ‘87 and had to abandon the ‘88 edition.

The loss to LeMond in ‘89 effectively ended his career, even though he didn’t retire until 1993.

9. France has hosted more Grand Départs than any other country with 73

Since the 1950s, the starts of the Tour de France course, known as the Grand Départ, have typically taken place in different French towns every year.

That changed at the beginning of the 1970s when the race organizers started awarding the Grand Départ to different cities outside France. The intention was mainly to increase international interest in the Tour de France, and the sport of cycling as a whole.

Of the last 109 editions of the Tour de France, France has hosted 73 Grand Départs, the Netherlands has hosted six, Belgium has hosted five, while Germany – four. The United Kingdom and Luxemburg have hosted two occasions each, while Spain, Switzerland, Monaco, and Ireland have each hosted the Grand Départ once.

The 2020 Tour de France Grand Départ will, once again, be hosted in France.

10. Greg LeMond won the 1989 Tour de France by the smallest margin ever

Greg LeMond had planned on defending his title in the 1987 Tour de France. Earlier that year, however, LeMond fell and fractured his left wrist while riding in a tune-up race. As if that wasn’t enough of a setback, LeMond was accidentally shot in the back and side with 60 pellets by his brother-in-law during a hunting trip.

He survived, although he was later informed that he lost 65% of his blood and was within 20 minutes of bleeding to death. He made a miraculous recovery and returned in time for the 1989 Tour de France, where he exchanged the lead frequently with rival Laurent Fignon.

Experts and journalists had already penciled in Fignon as the winner, Fignon was 50 seconds ahead by the 21st and final stage. LeMond was able to generate less aerodynamic drag than Fignon as he rode flat-out and provided one the best Tour de France highlights in history as he finished at a record pace to beat Fignon by 8 seconds.

11. France has produced 36 Tour de France winners, the most of any country

The Tour de France started in France and was largely dominated by Frenchmen in the early years of the race. Since the introduction of non-European participants to the race, however, French cyclists have found it hard to win trophies.

As this poignant article The Conversation, the Tour was created as a way to unite the French people and reinvigorate them through energetic examples of its competitors.

But with the continued dominance by Belgians and Americans, the French people have begun to largely ignore the Tour de France. The ones that are still watching will have their eyes glued to young French rider Julian Alaphilippe and his compatriot Thibaut Pinot. They represent the best chance to add to those French Tour de France statistics at the 2020 race.

Q: When is the Tour de France?
A: Traditionally, the race is held during the month of July.

Q: How many watts does a Tour de France rider generate?
A: The Tour de France average watts can go as high as 350 to 375 watts on the climb up the Col du Tourmalet.