Injury in sports is quite common, and athletes have to prepare themselves for the risk of getting hurt. Sports injuries can occur in all kinds of disciplines, whether it’s in high-contact sports like football or even non-contact sports like volleyball.

Let’s take a look at some athletic injury statistics to get a better sense of the price athletes pay for the sports excellence they achieve.

Contents show
Ultimate Sports Injury Statistics:
1. The most common football injuries are orthopedic
2. Ankle sprains are the most common sporting injuries overall
3. BASE Jumping is one of the deadliest sport in the world
4. Nearly 250,000 athletes are treated in emergency rooms for soccer-related injuries annually
5. 10% of all contact sport athletes sustain concussions yearly
6. Baseball has the highest fatality rate for children age five to 14
7. As many as 1 in 4 rugby players will be injured during any given season
8. College sports injuries are an ever-present danger

1. The most common football injuries are orthopedic

American football is a highly competitive contact sport, and injuries are inevitable on the gridiron. Putting your body on the line in the name of athletic dominance has its consequences.

The extreme end of that spectrum is dislocations, tears, breaks, and even life-threatening brain injuries. Some lighter injuries, on the other hand, include sprains and strains to the lower extremities, which are the most common injuries in football.

Strains often occur from overuse or even improper training. Sprains, however, can range from damage to the ligaments to a torn muscle that often needs surgery and months of rehabilitation.

2. Ankle sprains are the most common sporting injuries overall

Ankle sprains show up as the most common sports injury in statistics, because they can occur in almost any kind of sporting activity. They are, however, most common in sports that have lots of running and jumping. Most ankle sprains happen in either basketball, football, soccer, or volleyball.

An ankle sprain is an overextension or even tearing of the muscle tissue that connects the bones of the ankle that help keep them stable. Sprained ankles have been estimated to constitute up to 30% of all injuries seen in sports medicine clinics. More than 23,000 people per day in the United States, both athletes, and nonathletes require medical care for ankle sprains.

3. BASE Jumping is one of the deadliest sport in the world

BASE Jumping is an extreme sport, where participants jump from a fixed object. Then, with the aid of a parachute, they descend safely to the ground. BASE is an acronym for the different fixed objects or locations that jumpers usually descend from; Building, Antenna, Span and Earth (cliffs).

Because BASE jumps are generally from a much lower altitude than other forms of parachuting (like skydiving), it is significantly more hazardous – with a risk of death of 1 in every 2,300. This makes it one of the most dangerous sports in the world.

Soccer, or football if you live outside America, is one of the most popular sports in the world – and with good reason too. It’s high-paced, high-adrenaline action with athletes in peak physical condition vying for the win. Because of its competitive nature, soccer players aren’t immune to injuries.

Sprains and strains are quite common in the beautiful game, but injuries can be serious and sometimes fatal.

The most prominent case is former Manchester City player Alf-Inge Håland, Håland was the victim of a horrific tackle from rival Manchester United player Roy Keane, sustaining one of the worst sports injuries in history. His knee was hurt so badly he needed surgery and was ultimately forced to retire from the game completely.

A concussion may be considered a mild brain injury, but it is not to be taken lightly. Concussions are caused by a blow to the head or a violent shaking of the head and body. In contact sports, this happens more often than you might think.

In fact, according to UMPC, between 1.7 and three million sports and recreation-related concussions happen each year. Five out of 10 concussions go unreported and/or undetected.

Two in 10 high-school athletes who play contact sports — including soccer and lacrosse — will suffer a concussion this year. Girls soccer sees the second-highest number of concussions and girls basketball seeing the third most, out of all high school sports.

Football concussion stats have been in the headlines in the last couple of years. It’s no wonder that a large study came out that tested the brains of 111 deceased former NFL players. It found that 110 of them had evidence of CTE.

6. Baseball has the highest fatality rate for children age five to 14

A lot of children take part in sports and according to youth sports injury statistics from Standford Children’s Health, about 30 million children and teens participate in some form of organized sports, and more than 3.5 million are injured each year. 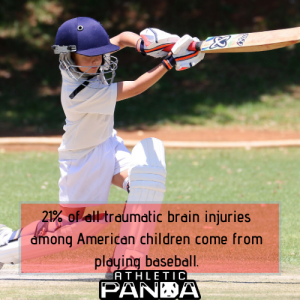 Injuries are inevitable in sports, whether from the trauma of contact with other players or from overuse or misuse of a body part. Youth sports injuries are on the rise, so it’s important to ensure that kids stay safe while playing sports.

Basketball, baseball/softball, bicycling, football, and ice hockey rank in the top five of the most dangerous sports for kids aged 5 to 14. They rank as the top five sports that children are treated for in hospital emergency rooms.

7. As many as 1 in 4 rugby players will be injured during any given season

Rugby is a high-contact, fast-moving sport that heavily involves tackles and getting tackled. Each player performs, on average, 20-40 tackles per match – those rugby injury statistics are higher when compared to most other sports.

Forwards are more frequently injured than backs, because of their greater involvement in physical collisions and tackles. Between 5-25% of those injuries are to the head, while 44% of those head injuries are concussions.

57% of rugby injuries occur during matches, and more often in the second half of the game. That’s why pre-season preparation is a key strategy in curbing the number of injuries.

(Source: At Your Own Risk)

Playing sports in college can be a fulfilling and enriching time in a young athlete’s life. What’s more, being part of a team can help improve interpersonal relationships. All this goes a long way in terms of long-term development.

The downside is that most young athletes put the benefit of the team ahead of their own safety and well-being.

That is likely why a recent survey by At Your Own Risk found out that over half of student-athletes have admitted to playing while injured “cause they couldn’t let the team down”. This puts student-athletes at a higher risk of repeat injuries or long-term damage, which has raised the importance of athletic trainers at all levels of sports.

With the growing concern about the risks of sports-related concussions, their importance has never been more emphasized. The effort to curb sports injury statistics is there, and we’ll hopefully start seeing fewer and fewer injuries as time goes on.

Q: What sport has the most deaths?
A: With a 1 in 2317 chance of dying, BASE Jumping is at the top of the most dangerous sports in America. 383 deaths have been recorded from BASE Jumping since April 1981.

Q: Which sport has the most injuries?
A: Football is the cause of 18.8 injuries per every 100 participants.

Q: What percentage of injuries are sports-related?
A: The US Department of Health and Human Services reported that 8.6 million people are hurt annually while engaging in physical activities. A third of that number are sports-related injuries.

Q: How many sports injuries are there a year?
A: According to a recent study from the US Department of Health and Human Services, an estimated 2.9 million injuries annually occur at a sports facility, athletic field, or a playground.