Online fantasy sports have experienced a massive surge in popularity since their humble beginnings as a casual pastime for sports fans in the 50s and 60s. Today, this is a multi-billion dollar industry with millions of dedicated players and fans all over the world.

Let’s run down some fantasy sports stats so we can see how and why this worldwide phenomenon came to be.

Contents show
Ultimate Fantasy Sports Stats:
1. The first reported fantasy sports league began in Boston in 1960
2. Magazine writer/editor Daniel Okrent is credited with bringing fantasy sports to the mainstream
3. The Fantasy Football Index became the sport’s first annual guide in 1987
4. The internet boom of 1995 revolutionized fantasy sports forever
5. At the turn of the millennium, most fantasy sports websites switched to a pay model
6. The popularity of fantasy sports was the inspiration for the show The League
7. Fantasy sports now has over 60 million players in the US and Canada alone
8. The fantasy sports market is expected to grow by $9.34 billion between 2020 and 2024

1. The first reported fantasy sports league began in Boston in 1960 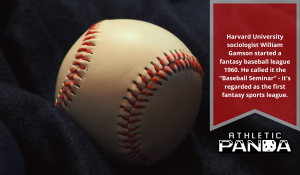 While the concept of picking players and running a contest based on their year-to-date stats has been around since shortly after World War II, the first documented account of fantasy sports can be found in the 1960s.

William Gamson started a fantasy baseball league with his colleagues at Havard with pretty simple rules. They would form rosters with existing baseball players and earn points based on the players’ final standings in batting average, earned run average, runs batted in and overall wins.

2. Magazine writer/editor Daniel Okrent is credited with bringing fantasy sports to the mainstream

The founding of the Rotisserie League in 1980 was an important development in the innovation of fantasy sports. This league had different rules — rather than run realistic simulations using statistics from seasons whose results were already known, Rotisserie players took on a more managerial role. They had to look ahead, predicting a players’ health, expected performance and playing time, decisions that real baseball managers had to make.

This new form of fandom quickly spread to sports journalists and a 1980 New York Times article about the league caused a media blitz, gaining coverage from CBS TV and other publications.

Many early adopters were first introduced to fantasy sports through journalists who played with the early founders the Rotisserie League, especially during the 1981 Major League Baseball strike. With nothing else to write about, most baseball columnists just started writing about the fantasy league.

The growth of fantasy sports continued into the late 80s and early 90s, a large number of companies emerged that calculated fantasy league stats for players and sent fantasy reports via fax.

John Benson went on to become a leading expert in fantasy baseball, publishing his first book in ‘89 and developing the first draft-simulation program — a precursor to the internet era of fantasy sports.

By the beginning of the 90s, fantasy sports already had millions of dedicated players in baseball, football and hockey leagues. Thanks to the boom of the dot.com era, fantasy sports websites became the new trend. RotoNews.com quickly became the largest league management service on the web.

Those sites had also figured out how to start monetizing fantasy sports, with Commissioner.com the first to offer paid fantasy baseball commissioner service featuring statistics, league message boards, updated box scores, and other features. Fantasy sports industry statistics and facts show that it was sold to SportsLine, late in 1999, for $31 million.

The growth in fantasy sports revenue attracted larger media players; Yahoo.com began its play into fantasy sports in 1999 while CBSSports bought SportsLine in 2004 after Commissioner.com had helped it generate $11 million in revenue.

5. At the turn of the millennium, most fantasy sports websites switched to a pay model

Despite economic instability, fantasy sports started to become a mainstream hobby. In the early 2000s, the NFL started to see a direct correlation between fantasy football popularity and NFL TV ratings. This prompted them to start running promotional TV ads for NFL fantasy football featuring current players for the first time, convincing the other major leagues to start accepting fantasy sports.

In the meantime, fantasy sports continued to grow. In 2003, a fantasy football research survey revealed that 15 million people were playing the sport in the US, each spending $150 a year on average. This made fantasy sports a $1.5 billion dollar industry.

This was only spurred on by the invention of Daily Fantasy Sports in 2007, which experienced a major boom between 2014 and 2015 with the dramatic growth of two competing online services: DraftKings and FanDuel. Thanks to their aggressive media strategies and the growing fantasy sports market, FanDuel and DraftKings were able to generate over $300 million in investments from companies like Comcast, NBC Sports, and Time Warner.

6. The popularity of fantasy sports was the inspiration for the show The League

Jeff Schaffer was a writer on Seinfeld and Curb Your Enthusiasm but he was also in several fantasy football leagues, which spawned the idea for ‘The League’.

It was inspired by the lives of Jeff and Jackie, the show’s co-creator and Jeff’s real-life partner, and focused on a group of high school friends in a fantasy league and the antics they got up to.

The show lasted seven seasons and had a huge impact on the culture of fantasy sports.

7. Fantasy sports now has over 60 million players in the US and Canada alone

Fantasy sports have been vital in maintaining interest in live sports and it’s also played a big part in driving up revenue for the major leagues too.

Research and stats for fantasy sports have shown that fantasy sports players spend more time watching live sports than the average sports fan and are more engaged in the sport of their choice.

With increasing internet and smartphone adoption, the demand for fantasy sports apps is reported to grow rapidly and contribute to the expansion of the global fantasy sports market size.

The current fantasy sports industry statistics say a lot about the future of the industry. Fantasy sports have become a multi-billion dollar industry, where online pay-to-play is just a fraction of the ecosystem.

There’s merchandise, sponsorships, tickets to actual games, draft parties, brand marketing and so on. Fantasy sports players like to pay for related material and that’s how the culture will sustainably stay afloat in the projected time period.

Q: What is fantasy sports?
A: Fantasy sports is a popular pastime where participants assemble virtual teams of real players of a professional sport and these teams compete based on the statistical performance of those players in actual games.

Q: Why is fantasy sports so popular?
A: Fantasy sports offer players the feeling of intense competition, the chance to own and manage their own teams, the opportunity to socialize with other sports fans, the thrill of victory and a hobby that requires little investment but offers great rewards.

Q: How much do fantasy footballers make?
A: Sites like DraftKings and FanDuel offer fantasy players the chance to win NFL-sized payouts, which is normally between 55% and 88% of the total entry fees.

Q: How big is the fantasy sports industry?
A: According to the Fantasy Sports Trade Association, Fantasy sports is a $7.22 billion industry with 59.3 million fantasy sports players in the United States and Canada as of 2016. As reported by Forbes, fantasy sports stats suggest that daily games are on track to grow 41% annually, reaching $14.4 billion in 2020.