Doping in sports is a tale as old as time. It has been synonymous with sports from the very beginning, dating all the way back to the creation of sports itself.

Let’s race down memory lane to look up some doping scandal statistics and see how the World Anti-Doping Agency is working towards fighting the ever-present abuse of performance-enhancing drugs.

Contents show
Ultimate Doping Scandal Statistics:
1. Performance-enhancing drugs in the Olympics date back to 1904
2. Benzedrine first appeared in sports at the Berlin Olympics in 1936
3. John Ziegler created the first oral anabolic steroid, methandrostenolone, in 1958
4. EPO is believed to have been widely used by athletes in the 1990s
5. The World Anti-Doping Agency was founded in 1999 to combat doping in sports
6. In 2019, WADA banned Russia from major international sporting events for four years
7. There were 1,804 confirmed doping violations from 322,050 samples tested in 2017
8. The number of overall samples analyzed by WADA increased by 6.9% from 2017 to 2018

1. Performance-enhancing drugs in the Olympics date back to 1904

Olympic doping goes all the way back to the inception of the games in ancient Greece. Athletes were known to drink “magic potions” and eat exotic meats in the hopes of getting an edge over their competition.

Over time performance-enhancing drugs in sports in general and in the Olympics, in particular, became a more sophisticated science and the use of strychnine, a pesticide used for killing small vermin, became widely used. Next came boosting testosterone and it wasn’t until the mid-1960s that sports federations all over the world started banning PEDs.

There are conspiracy theories about widespread doping programs in East Germany and Russia throughout the 70s and 80s. No clear evidence was found until much later when the Olympic Committee couldn’t penalize those responsible.

2. Benzedrine first appeared in sports at the Berlin Olympics in 1936

Benzedrine is the trade name for amphetamine, a stimulant used in the treatment of ADHD. According to the European Council, it first appeared in sports during the Berlin Olympics in 1936 and was also used by the British troops during the Second World War. 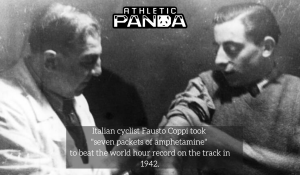 Amphetamines weren’t illegal at the time so they were used for an assortment of things, from aiding in weight-loss to serving as antidepressants.

They soon became recreational drugs and were given the street name “speed” Former Everton goalkeeper Albert Dunlop admitted to being an addict when the drugs were freely distributed in the Everton locker room during their championship-winning season.

According to steroids statistics and facts, anabolic steroids were first identified and synthesized in the 1930s but weren’t used for physical enhancement in sports until John Ziegler’s trip to Vienna with the US weightlifting team. The results were so impressive that lifters started taking more, and the substances spread to other sports.

Gold medalist pentathlete Mary Peters said that a medical research team was set up in the US at some point in an attempt to gather research into the use of steroids by lifters and throwers, only to discover that so few weren’t taking them that they couldn’t establish a worthwhile comparison.

The most prominent doping scandal involving anabolic steroids was at the 1988 Summer Olympics in Seoul where Canadian runner Ben Johnson won the men’s 100m race in record time but then subsequently failed the steroids testing when ‘stanozolol’ was found in his urine.

Carl Lewis was then given the Olympic gold title and the world record but it was later revealed that Lewis was the beneficiary of a large-scale doping cover-up by the United States Olympic Committee.

4. EPO is believed to have been widely used by athletes in the 1990s

EPO and the infamous “pot Belge”, a mixture of various drugs including cocaine, heroin, caffeine, amphetamines, and other analgesics, has a long history in the professional cycling world.

In 1998, the entire Festina cycling team was excluded from the Tour de France following the discovery of a team car containing large amounts of various performance-enhancing drugs, including EPO.

5. The World Anti-Doping Agency was founded in 1999 to combat doping in sports

WADA is a foundation initiated by the IOC to “promote, coordinate and monitor the fight against drugs in sports”. The body also established the World Anti-Doping Code, which covers substances and methods that sportspersons are not allowed to take or use.

In 2016, Professor Richard McLaren, an independent investigator working on behalf of WADA published a damning document that would later be known as the “McLaren Report”. It detailed how more than 1,000 Russians athletes in over 30 sports were involved in or benefited from state-sponsored doping between 2011 and 2015.

In the same year, WADA revealed that their systems had been hacked, and many analysts believe it was in retaliation against the report. The hack published, among other things, the Olympic drug-testing files of several athletes and the personal information of Russian runner Yuliya Stepanova, who helped blow the whistle on the whole scandal.

Documents obtained in 2016 revealed a statewide Russian doping program in preparation for the 1984 Summer Olympics. The previous Olympics in Moscow were dubbed the “Chemists’ Games” by an Australian study that alleged there was hardly a medal winner who wasn’t on some kind of drug.

Following the release of the McLaren Report, WADA recommended that the IOC ban Russia from competing in the 2016 Olympics but they rejected it and decided that individual sanction decisions would be made by each sport federation.

Despite widely accepted evidence, the Russian Olympic ban was lifted in 2018 by the IOC, a decision met with mass criticism. it was widely reported that some of the data retrieved from the Moscow laboratory may have been manipulated and tampered with before it was retrieved by the World Anti-Doping Agency.

1,459 of the violations came out of adverse analytical findings (AAFs), commonly known as ‘positive’ results. The remainder were derived from investigations and evidence-based intelligence into 317 violations committed by athletes and 28 by athlete support personnel.

WADA publishes an annual report which summarizes the results of all the samples WADA-accredited Laboratories analyzed and reported in WADA’s Anti-Doping Administration and Management System (ADAMS) in 2018.

This information is valuable to anti-doping organizations that can use it to adapt their strategies and better target-test their athletes, helping protect clean athletes, maintaining the integrity of sport and generating fewer doping scandal statistics.

Q: What PEDs are banned in the NFL?
A: All performance-enhancing drugs are banned by virtually every sporting body, in the NFL the most prominent PEDs are anabolic steroids.

Q: Are Russian athletes still banned?
A: Yes, they are. The World Anti-Doping Agency has banned Russia from all major sporting events until 2023.

Q: Do Olympic athletes get drug tested?
A: Yes, they do. The number of tests conducted during the Olympic Games has increased over the years, Olympic athletes can be tested at any time — potentially even years in advance of the next competition.

Q: What percentage of athletes use performance-enhancing drugs?
A: The latest report from the World Anti-Doping Agency shows 1,804 confirmed Anti-Doping Rule Violations (ADRVs) from 322,050 samples tested in 2017.

Q: What athletes have taken drugs?
A: Cyclist Lance Armstrong, cricketer Shane Warne, football legend Diego Maradona, and track & field star Marion Jones are just a few of the most high profile athletes that have used PEDs, according to doping scandal statistics.